Fibonacci is a fascinating subject that makes for some very interesting reading and conversations. Its numbers and ratios are found encoded into nature, the cosmos and the human body.

Enter Fibonacci into Google for a detailed understanding of its history, number sequence and countless examples of it found throughout the universe we inhabit.

An excellent example of Fibonacci ratios in the body is your hand.

By way of demonstration, hold your hand up in front of you with your fingers outstretched and pointing upwards. Turn it side-on so that you’re looking at your thumb and index finger, now slowly form a fist.

The reason you are able to do this is due to Fibonacci ratios that are built into the symmetry of your fingers and hand.

Architects and engineers use Fibonacci when designing structures such as bridges and buildings, its symmetry is efficient, scalable and fractal in nature.

Since Fibonacci symmetry and ratios form the buildings blocks of our world, it makes sense they would appear in the patterns that form on the charts as price makes its way up and down.

The philosophical debate revolves around whether Fibonacci symmetry observed on the charts is the result of something that’s encoded into the DNA of human behaviour, or the result of a self-fulfilling prophecy because people expect them to be important.

The simple answer is, ‘it doesn’t matter’, what’s important is to know how to use them. The fact that traders and computers make decisions based upon them is reason enough to include them in your trading arsenal. 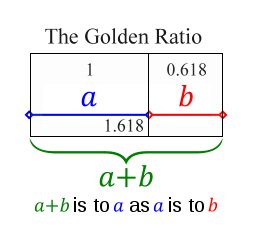 Phi is the 21st letter in the Greek alphabet and it is also used as a symbol for the ‘Golden Ratio’.

Phi (Φ) and  Pi (π) are part of something often referred to as ‘Sacred Geometry’.

The golden ratio has held a special fascination for thousands of years.

While the proportion known as the golden mean has always existed in mathematics and in the physical universe, it is unknown exactly when it was first discovered and applied by mankind. It is reasonable to assume that it has perhaps been discovered and rediscovered throughout history, which explains why it goes under several names.

Some of the greatest mathematical minds of all ages have spent endless hours over this simple ratio and its properties. But the fascination with the golden ratio is not confined just to mathematicians. Biologists, artists, musicians, historians, architects, psychologists, and even mystics have pondered and debated the basis of its ubiquity and appeal. In fact, it is probably fair to say that the golden ratio has inspired thinkers of all disciplines like no other number in the history of mathematics.

Mathematicians have studied the properties of the golden ratio, including its appearance in the dimensions of a regular pentagon and in a golden rectangle, which may be cut into a square and a smaller rectangle with the same aspect ratio.

The golden ratio has also been used to analyze the proportions of natural objects as well as man-made systems such as the financial markets. The golden ratio appears in some patterns in nature including the spiral arrangements of leaves and other plants.

The mathematics of the Golden Ratio and of the Fibonacci Sequence are intimately interconnected.

Scroll back to top