There are two specific pattern components at the heart of the Blackbox Trading Edge.

These core patterns were identified as a result of studying the charts in great detail.

MAB and FIBCON patterns form regularly on the charts on all time frames and provide High Probability Trade Opportunities if you can spot them. 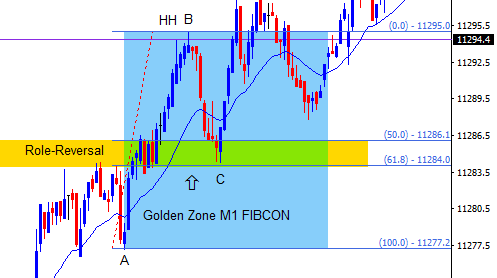 The chart pattern comprises of price breaking out from a previous level of support or resistance to make new highs or lows, followed by price retracing to a significant level often confluent with the 50.0 – 61.8 FIB levels – Golden Zone – and/or the moving average where it reverses then continues in the direction of the breakout.

This A-B-C Chart Pattern can be seen again and again on the charts across all markets and with experience can be traded profitably.

We have called these patterns the MAB and FIBCON, where MAB stands for a ‘Moving Average Bounce’ and FIBCON stands for a combination of ‘Fibonacci’ and ‘Confluence’.

These patterns are essentially the same in that they form the A-B-C chart pattern as described, the difference being whether the 21 period exponential moving average is involved at point C where price retraces to and then reverses.

It is important to note that the A-B-C chart pattern is a Pure Price Action pattern that forms due to the confluence of different types of support and resistance. It is not based on candlesticks patterns or indicators.

On occasions pin-bars, inside-bars, engulfing-bars or various types of doji form and are present in the A-B-C chart pattern but from a price action trade setup perspective they are irrelevant.

It is structure that determines the trade entry.

It is structure that determines the stop-loss placement.

It is structure that determines the profit target.

Some traders promote trading the higher time frames only and suggest that the lower time frames such as the 1 minute and 5 minute should be avoided. However, in our experience ‘structure is structure’ and these price action patterns form on all time frames, offering at least 2R trade setups.

We would also argue that trading the lower time frames has its advantages, providing more trade opportunities and increased cycles of learning, which are two of the reasons why we have chosen to Specialize in Trading the DAX Intraday.

This next screenshot is an example of a specific FIBCON known as a MAB since the moving average is in play.

We call this example a ‘Golden Zone MAB’ since the reversal of price at point C incorporates both the 21 period EMA and 61.8 FIB level.

By definition, all MABs are FIBCONs but not all FIBCONs are MABs.

The important thing to note about MABs and FIBCONs is that price reverses at point C when there is a strong confluence of support and resistance which undergoes a clear role-reversal.

There is a very specific FIBCON chart pattern that we call Reversal FIBCONs or REVFIB which is also incorporated in our Trading Edge. 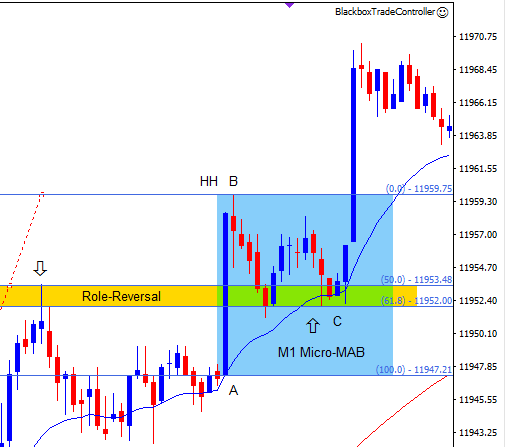 We have compiled a number of MAB / FIBCON Examples that explain the concept and demonstrate their power and potential.

Let’s take a look at the A-B-C chart pattern in detail and break it down into its component parts.

The Reversal FIBCON chart pattern is a very specific FIBCON that occurs when price reaches an area of major support or resistance such one of the higher time frame zone boundaries or the top / bottom of a range.

The key characteristics of the Reversal FIBCON or REVFIB chart pattern and structure are as follows:

We have compiled a number of Reversal FIBCON Examples that explain the concept and demonstrate their power and potential.

Trading is all about probabilities and no trade is ever a dead cert. However in our experience, high energy, high probability trade opportunities occur when our trading edge is in play and the more confluence the better.

High probability setups can be identified when: –

Waiting patiently for an impulsive-corrective A-B-C chart pattern acts as great filter since you either have one or you don’t!

The A-B-C chart pattern is the result of a build-up and release of energy which happens repeatedly on all markets and all time frames. Learning to identify and trade this pattern will come with time and experience and can potentially be very lucrative.

The FIB tool uses horizontal lines to represent the key Fibonacci levels and identify these potential new areas of support or resistance before the trend continues in the original direction.

We have been fascinated by the subject of Fibonacci which came up regularly in the trading systems we evaluated and when studying the charts. It became clear that it was a subject that caused much confusion amongst traders such that it was often dismissed as being unreliable and irrelevant.

As mentioned, it can be very subjective and it can often be confusing as how best to mark up Fibonacci levels on the charts. A common misconception of traders is to draw the 100% retracement level from where they think the move began, so they typically choose the highest or lowest point of the first candle.

Fibonacci structure is a building block and as such it needs to be built on a solid foundation. Therefore it is logical that the 100% retracement level or reference point would be a predefined level of support or resistance, which may not necessarily be the highest or lowest point of a move.

During our studies we experimented with the FIB tool and found that when we used these known reference points, the chart patterns tended to be more precise and therefore led to higher probability trade setups.

When characterizing the reoccuring price action chart patterns we had observed, we found that the 50.0 and 61.8 Fibonacci retracement levels – the Golden Zone – were often in play, and led to potential high energy, high probability, high value trade setups, especially when confluent with other key components of the Price Action Grid.

We concluded that the 100% retracement level should be taken from one of the following:

In other words, the active component of the Price Action Grid, which in this case is Yes High. 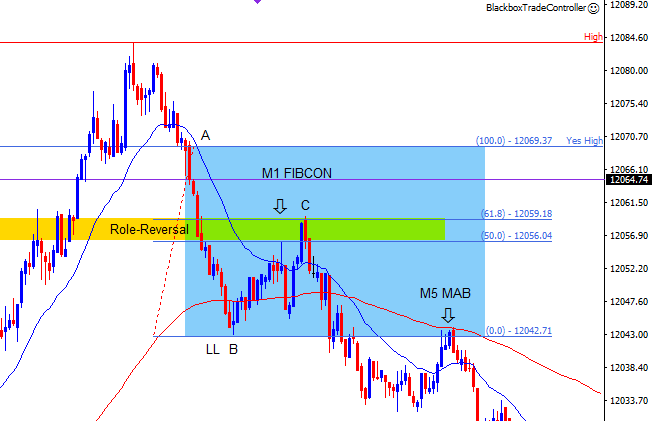 Professional traders and computers base their decisions on known reference points i.e. predefined levels, some of which are obvious such as the intraday key levels, but others like horizontal or sloping support and resistance need to be accurately identified, which takes time and comes with practice and experience.

It is important to point out that this is not a ‘force-fit’, it is about using common sense and the key components of the Price Action Grid to determine the most logical reference points based on price action and chart structure.

This video by entrepreneur, peak performance trainer and stocks/FX trader Adam Khoo, starts by explaining a little bit about the history of Fibonacci numbers and ratios and how they are embedded throughout nature, architecture and biology.

He goes on to demonstrate the power of Fibonacci retracement levels on the charts and how they act as support and resistance as price moves up and down. He explains how traders can use the Fibonacci retracement tool as an additional confluence to identify high probability trades when trading with the trend.

Scroll back to top